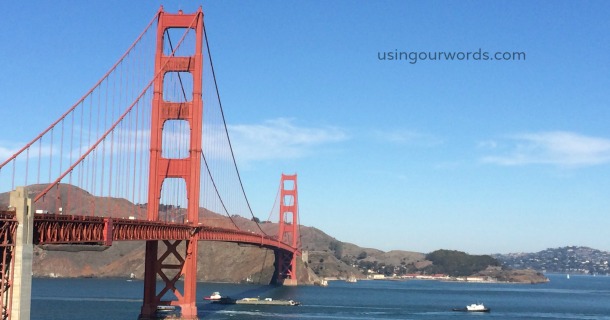 A (dreaded) day off of school at the beginning of the week had us playing tourist in San Francisco (where we spontaneously met up with some of our best friends who moved away!) and Big came home telling Lenny that he actually learned a lot. (I’m guessing he was referring to Little’s genius in Lesson #2.) But he wasn’t the only one to get smarter this week…

Lesson #1: You know those days when you’re grumpy and feeling like your kids are ungrateful and whiny? Chances are, you might be too. And the best way to snap everybody out of it is to plan a spontaneous adventure that shocks everybody out of the everyday blahs.

Lesson #2: When you buy your kid a humongous double scoop waffle cone at Ghirardelli, and then say, “Don’t eat too much, I don’t want you to get sick.” You can’t help but feel outsmarted again when he replies, “You gave me all of this! Of course I’m going to eat it.” And he did.

Lesson #3: You know what was epic? Everything Little did this week. (According to him, at least.)

Lesson #4: While our friends around the country are buried deep in snow, my California kids are trying to help our drought issues by doing rain dances. At least that’s what I assume since I found two of them running through the sprinklers at 8:15am — in t-shirts and shorts.

Lesson #5: When your Mr. Tough Guy kid rediscovers his softer, artiste side, you’re sure to run into challenges. Little’s latest problem? “Drawing a gun is actually really, really hard.”

Lesson #6: Considering I overheard Big exclaim to Little that he literally almost killed him as they grazed each others’ legs during their hip hop extravaganza, I’m pretty sure we can all agree that the definition of “literally” has officially changed.

Lesson #7: I’m not gonna lie, it feels good to watch your 5-year old score 6 points in his basketball game. Especially when only two of them were for the other team.

Lesson #8: A few (or more) losses make a big victory that much sweeter. Just ask the kids (and parents) from Big’s awesome basketball team. Or just tune in. I’m guessing ESPN will air it in prime time later this week.

Lesson #9: Little and Pink truly have a good thing going. When she asked him to read her a princess book that was waaaayyy beyond his ability, instead of saying he couldn’t, he did what he could. And from the other room, it sounded a bit like this, “A. And. The. She. A. The. The. The. A. She.” And they played happily ever after.