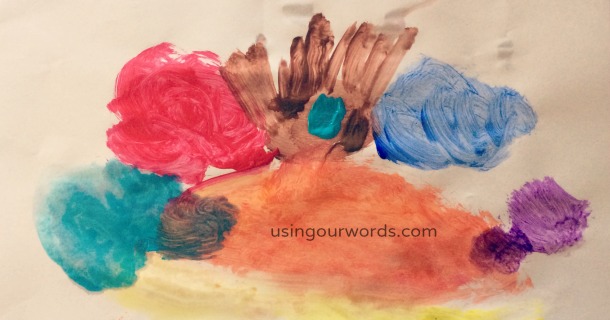 One of my favorite things about Little is that he’s so very different from me. I can’t get enough of listening to his thoughts and trying to figure out how that crazy cool brain of his works. The only thing that’s predictable about this kid is that he’s totally unpredictable. In a good way.

But recently, I’ve seen a change in him. It was right before Christmas, I think, when he fell back in love with art. As a toddler, he’d spent hours coloring — everything from paper to the walls to his body. He got such a reputation for his “creativity” that all of his 2-year-old birthday presents were (washable) art supplies. But then sports and superheros took over and the markers got pushed aside. Until one day, at school, he decided not only was he going to start coloring again, he was going to do it with gusto.

This time around though, his gusto wasn’t wild abandon. No, this time he was determined to stay inside the lines when it was a coloring sheet, and draw realistically when it was freehand. He started coming home from school each day with anywhere from three to six pages of coloring. Each one was more perfectly within the lines than the last. I loved seeing him reunited with his passion and — if you ask his totally biased mom — talent.

But part of me felt a loss. With the introduction of his predictably perfect sheets and PAC-12 football player drawings, I mourned the passing of purposeful scribble and his wonderfully passionate descriptions of what was so obviously on the page, from his point of view. Furious lions, Green Lantern saving a backhoe loader, witches flying through the jungle. They were just gone, it seemed.

Then the other day, when he’d had enough of football goals and college logos, Little asked me if he could paint. I’ll be honest, I huffed a bit. Because paint in our house is just so messy, and hardly seems worth the effort when the kids get bored after five minutes. But I said yes anyway.

Moments into his artistic process, I was so glad that I’d given in. Sure, there was the paint all over the table. And, in no time, the playroom carpet. But there was also a glimpse of my artist, formerly known as outrageous.

Me: Wow, Little, I can see you’re really enjoying that. What are you painting?

Him: It’s an ice-breathing dragon.

Him: This is a submarine.

Me: I thought it was a dragon…

Him: It is. He has a submarine mustache.

Obviously his wild imagination is still tucked inside the head that now sports a tween-y hipster haircut and a big-kid face. Obviously he didn’t lose that fascinating part of himself simply because he discovered new skills. Obviously I just need to say ‘yes’ a bit more, and give him the space and tools he needs to find his next great idea. Because if there’s one thing I can predict about the future with this kid, it’s that it’s going to be colorful.