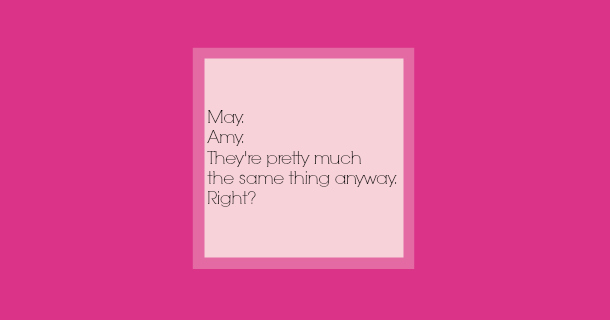 Remember back in January when I said I’d be writing for this lovely blog a bit less because I was going to pursue my dream of writing a book? Yeah, that hasn’t happened.

Because I had to eavesdrop on a precious moment.

Because my kids had another day off of school.

Because a kid doing awesome work caught my attention.

Because Lenny’s company sent me to Puerto Rico.

Because Pink got sick and threw me for a major loop at Little’s Kindergarten registration.

Because my kids needed to do Valentines.

Because my kids wanted to play late.

Because I had to pack for the snow.

Because I met some other moms doing awesome things.

Because I had to help raise money for Big’s school.

Because I had to get my hair done to meet Kelly Corrigan.

Because I had to read a book. Or two.

Because baseball season kicked in to overdrive.

Because my inbox was full. Again.

Because I had to clean out my purse.

Because I got invited to Disneyland.

Because there is always something I need to write about.

Because I simply haven’t made it a priority.

So for the entire month of May, I’m kicking the excuses to the curb. Because there will always be something. I’m just working a bit harder to ensure that some day, one of my somethings will be that awesome book I wrote.

What does that mean for you lovely people? Well, I’ll be blogging less frequently (for real) throughout the month of May. I’ll be slow(er) to reply to emails. Heck I may even delete some without opening them (not yours, of course). Facebook’s stock may plummet thanks to a dramatic drop in page views (but that doesn’t mean I don’t like everything about you). I’m even going to miss out on an awesome opportunity or two that could have been shared here.

Life absolutely won’t slow down. Pink will turn three. Big will have his First Holy Communion. Mother’s Day will be lovely. My kids’ schools will have parties and open houses and yet another day off. TV shows will have heart-stopping finales.

But I will be heads down, writing my book every “free” moment I have.

Don’t get me wrong. I don’t think a book can be written in a month. At least not a good one. But I need momentum, and now is my time.

Thanks for being out there, as always, to cheer me on along the way!