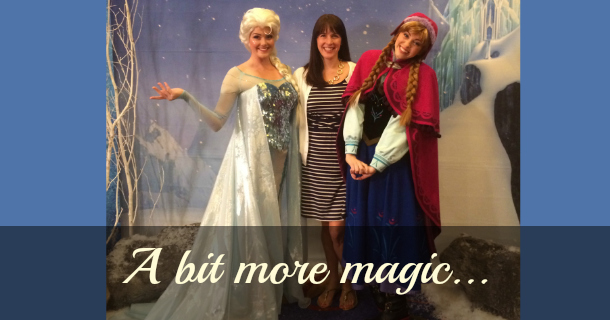 When I first took a deep dive into this crazy world of blogging, I came at it from the brand side. I was working for Yahoo! and I got the amazing opportunity to move out of my comfort zone in the in-house creative team to join the social media team, where I managed an influencer group called the Yahoo! Mother Board. This group of external bloggers was made up of about 80 extremely talented women who were pioneers in the industry.

Spending almost a year in that role was the best blogger boot camp I could have asked for. I learned about why brands want to connect with moms who write about everything from politics to crafts to education to public meltdowns (theirs and their kids’). I also learned what bloggers value in a relationship with a brand (the key word there being relationship). So, at times I can be hard on companies who don’t get it. But when a company — and its partners — do get it, I figure they should be celebrated.

Disney Social Media Moms Celebration was a powerful collaboration of brands — some under the Disney umbrella, and others who are simply Disney partners. Each one I encountered took the time to think about the audience, and find a way to make a meaningful connection. I was so impressed and it made me eager to share.

Because, let’s face it, it wasn’t just me they wanted to connect with. It was you. You are the reason I was invited to this conference. Disney and its partners knows that you’re reading, listening, and sometimes even making purchasing choices based on what I write on this blog. And I hope you’ll give each of the following a bit of extra attention should the occasion arise. Because if you ask me, they deserve it.

Disney Interactive
Last year I got the chance to see the impressive work this team does in the name of entertaining our kids when I visited Club Penguin headquarters. It turns out, this team also creates other great Disney apps that highlight some of our family’s favorite characters, like the loveable Doc McStuffins and the beautiful Frozen sisters. My kids hadn’t arrived yet when they were doing the app demos, but let me tell you, there were some big smiles reflecting on those iPads.

*Giveaway*- It may be 100 degrees out, but my kids still can’t get enough of Frozen. Feel the same? Then leave a comment on this blog post (not social media sites) by Tuesday, May 20, 2014 at 11:59 PDT, and you’ll be entered for a chance to win the Frozen: Storybook Deluxe app, courtesy of the Disney Interactive team. With this playful app, when your kids say, “Do you want to build a snowman!?” for the hundredth time, you can actually answer, “Yes!” Plus they can read or hear the story, play games, and watch some of their favorite movie clips. One winner will be chosen using Random.org and will be contacted via email.

Hollywood Records
If you’re a Radio Disney junkie like myself, you’ve probably heard Sabrina Carpenter’s Can’t Blame a Girl for Trying. Thanks to Hollywood Records, we were lucky enough to hear it — and her three other yet-to-be-released singles — performed live. Our whole family adored her music, and her concert was definitely a highlight for us. Keep an eye out for superstar-in-the-making, Sabrina Carpenter, on Girl Meets World, coming to the Disney Channel on June 27th (which is kind of a special day around here anyway).

Gogo SqueeZ
A few years ago, if someone told me “squeezer” was going to be one of the most frequently said words in my house, I would have laughed at them. Now? I’m laughing all the way to the lunch box. Because not only did Gogo SqueeZ sponsor an outrageously cool private party for our group in Toon Town one night, they also picked my name in their raffle to win a year’s supply of Gogo SqueeZ (and I’m good at sharing…with kids, at least). I’m pretty sure Big thinks we’re as cool and famous as the Duncan Family now.

Coppertone
When I go to put sunscreen on my kids, they act like I’m a maniac coming at them with a machete. The terror and screaming is better than a triple shot of espresso to get my blood pumping in the morning. But my new friends at Coppertone not only put a glass of wine in this introvert’s hand just in time for the lovely meet and greet cocktail hour they hosted, but they also introduced me to their Clearly Sheer line of sunscreen. It’s light, smells good, and my kids actually ask for it.

Disney Junior
I mean, seriously. How cool is Disney Junior? (Please read this if you didn’t immediately respond with “So flippin’ cool!”)

Alamo
Now this was a Disney partner that was all in. They sponsored the general session, which included speakers like the dynamic and inspiring Maxine Clark, the hilarious and encouraging Donald Driver, and the one and only Grumpy Cat (yes, really…well, he didn’t speak, but…). They also went all out — with the help of a great presentation by Megan Maguire, Alamo’s Brand Publicity Manager — to show that they understand and support moms in the social media space. The Disney gift card and candy snack bar they hosted, well, that was just the chocolate on the pretzel.

Disney Studios/ Walt Disney Pictures
Get ready for Maleficient. We got to watch a never-before-screened extended clip and, wow, it looks absolutely breathtaking. Based on my kids screaming and crying their way out of a trailer they showed the whole family, it’s a bit too dark for sensitive kiddos like mine, I’m afraid.

Fun facts:
*Elle Fanning is totally charming in person, and admitted she wanted to be Sleeping Beauty as a little girl. (“See, dreams do come true!” she sweetly told all the little kids looking up to her.)
*They cast Vivienne Jolie-Pitt as the young Aurora because they needed a little girl who wouldn’t be afraid of Angelina Jolie in her Maleficient costume. (We met an equally stunning — and frightening — Maleficient while we were there, and my kids still talk about her creepy wave to them.)

AM Tourister– Check out their fun Color Your World collection.

Hanes– How versatile are these bandinis?

H20+– This stuff turns a bath full of rubber duckies into a luxury spa.

Kohl’s– Have you seen their new super cute Disney Magic At Play line of clothes?

DisneySports / ESPN– My boys are hoping this is one relationship that blossoms into a lifetime love affair.

All photos not including me are courtesy of the outrageously talented Josh Hallett (@hyku).

Disclosure: I was honored to be invited to the 5th Annual Disney Social Media Moms Celebration held at Disneyland recently. While I paid a fee to attend the conference (as well as my extended stay and travel), it was enhanced with perks to give us an even more magical time. I am not compensated nor required to share my experiences. This giveaway is courtesy of Disney Interactive.