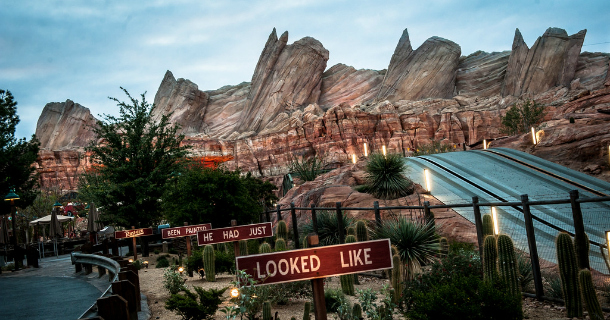 My favorite animated movie of all time is Cars. I love the flawed, but honest characters, the beautiful story of friendship and teamwork, and watching Little “break dance” to the perfectly chosen soundtrack.

When I went to Disney Social Media Moms Celebration in April, I had no idea I’d fall in love with the movie even more — in an entirely new way. Of course I’d heard of Cars Land, but I hadn’t visited it yet. And while a ride is fun and all, I didn’t think there would be much more to it than that.

Then, at the conference, I got the chance to hear from Jay Ward, Pixar’s Creative Director of the Cars franchise (aka Cars Legacy Guardian) and Kathy Mangum, Walt Disney Imagineering’s Creative Executive about the making of Cars Land. And I was in awe — of them, of their process, of their loyalty to the brand, of their ability to live so deeply in their imaginations as the same time as their realities, and of so much more…

Here are a few of the gems this brand nerd took away (along with some great pictures of the experience taken by the talented Josh Hallett, @hyku). As a writer, I’m doing my best to take each of these to heart as I decide what I’ll write about — here or elsewhere. Because content for content’s sake is just noise. I want my voice and my stories to be meaningful — to you and me.

Lesson #1: Quality is more important than quantity.
Yeah, yeah, it’s a cliché we’ve all heard hundreds of times. But how many people truly live by it? Especially when dollar signs are involved. Jay Ward talked about all the merchandising proposals they get for the Cars franchise (among other movies). He explained they only say yes to things that truly make sense for the brand. For example, a toothbrush with a Cars logo? That doesn’t mean much. An electric toothbrush that revs its engine before starting then squeals to a stop at the end of 2 minutes? Now that makes sense.

Lesson #2: Go your own way.
When it came time to make die-cast cars from the movie, rather than making them the same size as other popular brands (so they would fit on existing tracks, etc), the team decided to make them bigger. They felt the larger size would allow the characters to come to life in a special way. And maintaining the personality of the characters was worth the risk to them. Since over 260 million have been made so far, I’m thinking it worked.

Lesson #3: Know your own strengths — and others’ as well.
The teams from Pixar and Disney worked extremely closely together to make Cars Land the best experience possible. While the Pixar people knew the movie inside and out, the Imagineering team knew how to bring that movie to life inside the park. They traveled Route 66 together, getting to know real people and their stories along the way. Their passion for creating authentic storefronts and an atmosphere that blends reality and animation made for one truly magical end product.

Lesson #4: Write a love letter to your fans.
I still can’t help but hear Jay Ward’s words in my head. When they created Cars Land, they did everything they possibly could to make fans feel like it was a love letter written just for them. From the second you walk in to Radiator Springs, it is absolutely that. The stops along the way beautifully mirror the town in the movie. Radiator Springs Racers even rides like the movie — a few slow and sweet moments, some silly and fun interactions with the characters, and a fast and thrilling ending.

Lesson #5: Go the extra mile. Even if only a few people notice.
From putting hidden Mickey’s in the hoods of the cars to getting Larry the Cable Guy to create seven different original songs for Mater’s Jamboree (Pink’s absolute favorite…including the line, “Don’t ferget yer junk!”), there are all kinds of really special touches that make Cars Land an immersive sensory experience. And to think, if I hadn’t been at this conference, I might not have even noticed.

Have you been to Cars Land? What’s your favorite thing about the experience these talented people created? (Because you don’t have to be a brand geek to appreciate the details!)

Disclosure: I was honored to be invited to the 5th Annual Disney Social Media Moms Celebration held at Disneyland recently. While I paid a fee to attend the conference (as well as my extended stay and travel), it was enhanced with perks to give us an even more magical time. I am not compensated nor required to share my experiences.

All photos are courtesy of the outrageously talented Josh Hallett (@hyku).