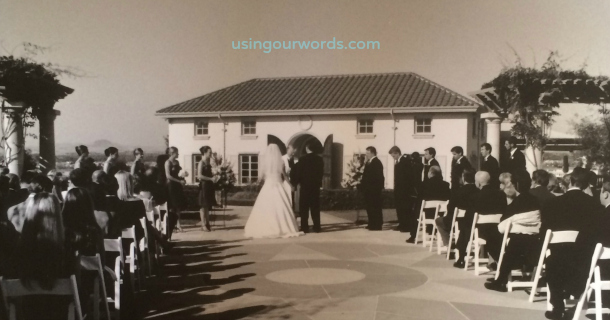 Eleven years ago, I woke up on a Saturday morning with butterflies in my stomach. I was surrounded by people who meant the world to me, and looking forward to one of the most exciting days of my life. Makeup was applied — a lot of it. Hair was done — and aggressively hairsprayed. And in just a matter of hours, we were ready to head to the big event.

My friends, my dad, and I hopped into the limo and headed one step closer to the moment of truth. There, a beautiful white dress and my future husband awaited me. This was the day we’d been waiting for.

This past Saturday morning, I woke up with butterflies in my stomach. I was surrounded by people who meant the world to me, and looking forward to one of the most exciting days of Big’s life. Makeup was applied — a little, I think. Hair was done — if a ponytail counts. And in just a matter of minutes, we were ready to head to the big event.

My family and I hopped into our minivan and headed one step closer to the moment of truth. There, a freshly raked field and Big’s hopes for a Little League championship title awaited him. This was the day he’d been waiting for.

Yes, it was our 11th wedding anniversary, and there we were, hot, sweaty, dusty, and ready to cheer on our son’s baseball team.

We’d meant to — tried to — make plans to get away, to celebrate. But life, and the calendar, kept filling up. Early on that week, odds were, there wouldn’t be a game that day. Then those little boys played their hearts out in a couple games to beat the odds. The game was on. Plus, we’d learned that Big would be honored with a special sportsmanship award that afternoon at Little League Celebration Day. And the team he’d grown to adore would be celebrating a spectacular season — win or lose — that evening.

For a few days, I was a bit panicky. Every year we’ve made a big effort to honor and celebrate our anniversary. Was 11 years the time when you just kind of let it slide by? Was that the point in a marriage where it just became another day?

Then, on our anniversary eve, I realized that wasn’t the case at all. I was alone in a quiet car (a rare treat these days) driving to San Francisco to meet up with two of my bridesmaids — friends I hadn’t seen in far too long. And that’s when it hit me. The girls who laughed beside me in the hotel room the night before I said “I do” would soon be laughing beside me again. All these years later. What a gift.

Because the years that have been a bit tougher than we’d like on the bodies that were beautifully tanned and toned on our wedding day, well they’ve been outrageously generous to our hearts. This day? It wasn’t just the day Big had been waiting for. This was the day that we’d been waiting for, starting all those years ago when we said “I do”.

We stood there on June 7, 2003, with friends and family as our witnesses, in the hopes of building a home, a family, and a beautiful life together. And we’ve done just that.

Time has taught us that home is more than the walls that protect us at night. Home is a place where you’re constantly able to smile and wave at the people who have touched your lives — whether it’s a generous neighbor, a former classmate, or the guy who was sitting next to you on the bench when you realized you’d be getting the second-place medal in the Little League championship game, but you high-fived anyway because you were proud of how far you’d come together.

Time has taught us that family has very little to do with bloodlines, and much more to do with the people who are there for you — win or lose.

And time has taught us that beautiful can also be messy. Because where there’s intense love, there’s bound to be loss and worry along the way.

Yes, this anniversary, our gift was a full day, a full life, and full hearts. Because just being there to live your dreams coming true, that’s celebration enough.