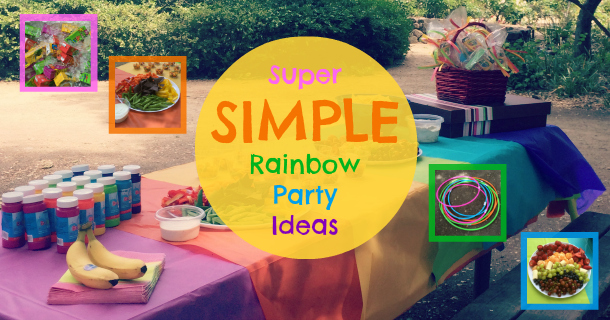 When Pink requested a rainbow tea party for her 3rd birthday, I thought, oooh I can totally rock that. (Yes, again.) I started pinning outrageously awesome rainbow layered cakes, Jell-o molds, printed invitations, and more. And then I remembered, I don’t do that stuff. (Yes, again.)

So, here’s how we kept it super simple (besides not having an actual tea party at the tea party, of course).

INVITATIONS
There are a variety of great online rainbow invitations. (You know, the kind that track RSVPs and let you send mass messages to attendees.) We went with Evite’s “Spectrum” and it was a great way to introduce the theme.

THE OUTFIT
Pink happened to have a rainbow-ish dress from Gap Kids, and she wanted rainbow clips in her hair. The next day (because of course this is how she wanted her hair done forever more) I added a twist before placing each clip and it was even cuter. (These clips are really cute too!) 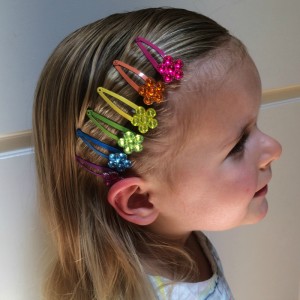 DÉCOR
Since our little party was at a park, all we had to work with was a picnic table and dirt. In your home you can add a few balloons to make it more festive. Or not. (Think simple, people. Simple.)

Rainbow Table
I bought 6 rectangular plastic tablecloths at the party store and made my own disposable, reasonably priced rainbow tablecloth. I placed the pink/red first, then put the orange on top, and so on—pulling as I went to make each color even. Since it was windy, I should have used double-sided tape to hold each color in place, but I didn’t. (So like me, I know.) I did, however, bring scissors to cut off the excess table cloth material at the end of the rainbow. (So unlike me, I know.) 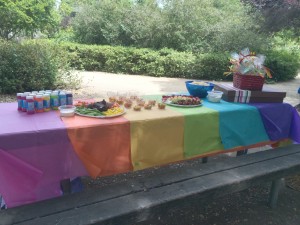 Rainbow Reflection
Rainbow In My Room was actually a gift Pink received and I think it would be so much fun to have at an indoor rainbow party for little ones to ooh and ahh over.

ACTIVITIES
Since we were at a park with little kids, I didn’t want to plan organized games, so I can up with entertainment that doubled as décor.

Bubbles
These inexpensive party-store bubbles came in a variety of colors and were great take-home favors as well. I had plenty on hand for kids and adults alike, and brought Sharpies so parents could label their children’s bubble tops (but keep the Sharpies out of little ones’ hands…trust me). 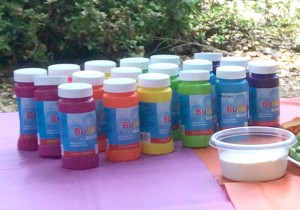 Hula Hoops
I bought a couple of each color to have nearby for kids to play with, and sent a few home with the kids who really enjoyed them. 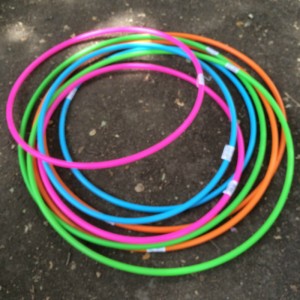 Rainbow Art Table
I placed a stack of white poster board on the table (which was great for a windy day, but indoors you could use easel paper like this), along with clear cups filled with rainbow-colored markers (8 red in one cup, 8 orange in another, etc., etc.). It was amazing to see little kids and their big siblings collaborating to make a beautiful picture. I kept offering kids their own sheets, but everyone preferred to sit and work together.

MENU
Our simple party didn’t include plates or utensils, so I prepared goodies that were perfect for toddler-sized fingers and tummies.

Rainbow Fruit Platter
This was simply made up of whole and halved strawberries, peeled sections of mandarin oranges, large peeled banana chunks, small bunches of green grapes, blueberries, and small bunches of purple grapes. I had mini-marshmallows to make clouds, but I simplified and ditched the idea at the last minute. 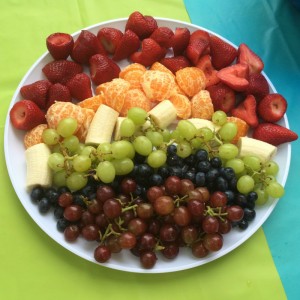 Rainbow Veggie Platter
This was easier to do in quadrants than stripes and was made up of red pepper strips, mini carrots, yellow pepper strips, sugar snap peas, and blue corn chips in the center. Again, I had visions of the ranch dip looking like clouds, but eh. Didn’t happen. (And nobody complained!) 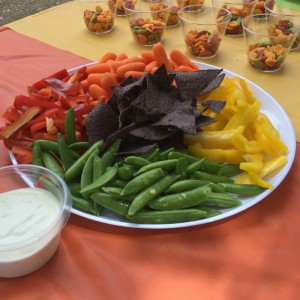 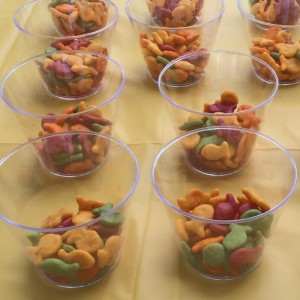 Store-Bought Cupcakes
My baking is best done by signing on the dotted line. I told the lovely people at Kara’s Cupcakes about our theme and they offered to make rainbow-colored toppers for all the mini cupcakes. Unfortunately they didn’t offer to bring them to the party, so they didn’t look quite as beautiful as when they left the store come party time. (Quote of the day, “I hope you already took a picture of the cupcakes!” Um, no. I hadn’t.) 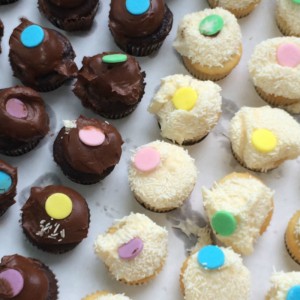 Colorful Juice Boxes
While we had plenty of mini waters on hand, we also got a variety of flavors/colors of juice boxes from Trader Joe’s. I loved how cute even the cooler looked! 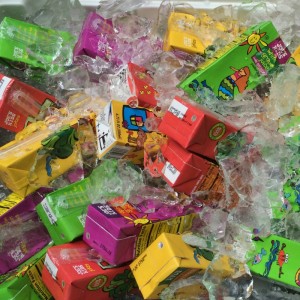 FAVORS
I really wanted to send home things that kids would get a lot of practical use out of. Besides the bubbles, each child got a clear goodie bag (tied with a few different rainbow-colored ribbons…though I love this rainbow ribbon) that included a small box of crayons and a piece of “rainbow” sidewalk chalk. 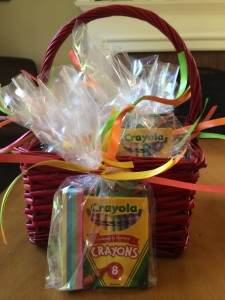 The best part of keeping the theme playful, but simple? The birthday girl was happy. The guests were happy. And I was happy.

Have you thrown a rainbow-themed party? What other ideas do you have to add to the list?

Disclosure: This post includes Amazon affiliate links which allow me to make a very small percentage of each sale from them.