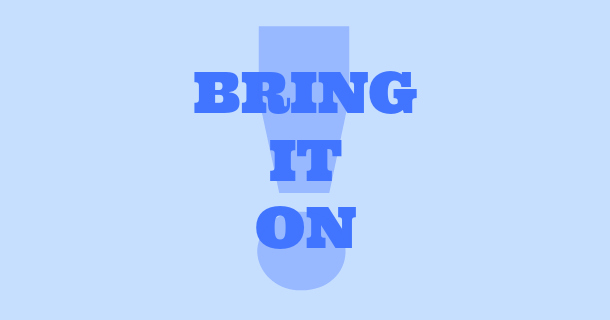 Back in 2010, when my blog was minutes old, I got some huge news. I would be going to BlogHer ’10 in New York City. I remember reeling from the excitement—feeling like I’d been given an enormous gift (and not just because my company would be picking up the tab for all of it). I mean, sure, I’d be there on behalf of Yahoo!, not my own blog, but still. I would be at the blogging event of all blogging events, alongside so many of the women I admired. What an amazing opportunity.

Fast forward to four years later (with two more BlogHer conferences under my belt—’11 in San Diego and ’12 in NYC), and my attitude has been kind of the opposite. Oh, BlogHer. It’s in my backyard this year. I guess I should go.

But the friends I’ve spent time with in the past? Most of them are skipping it this year. Either they’ve moved on from their blogs or are seasoned enough that they feel they don’t get much out of big conferences.

And me? Well, I’ve been questioning this whole blogging business lately as so many of the sites that helped me build my brand are making big changes. (Last week I got an email from Babble that they were doing away with their ad network the same day I got an email from Yahoo! that all my articles would soon be disappearing when they shut down Yahoo! Contributor Network. Who will call me a guru now?!) Also, BlogHer used to pick up my pieces and feature them on their site, but over the past couple years, any submissions I’ve made have been greeted with crickets. Maybe our visions don’t align any more, I started thinking.

But then I went to pick up Big from basketball camp last week and everything changed.

The head of the camp was giving his closing motivational talk, and I’m pretty sure I got way more out of it than any of the kids. He said something a bit like…

What an amazing week this has been. I’ve seen you out there and each and every one of you can go home proud. You have absolutely given your all. You’ve worked hard and you’ve had another great experience as a life-long learner.

You’ve worked with some of the best coaches in the country. You’ve honed your skills and become stronger. And you’ve made new friends. Just think about that. Looks around and think about that.

I want you to thank your parents for sending you here. For giving you this experience. Because any opportunity you have to stand on the court with the leather in your hands is a gift.

My heart puffed up with pride. I thought about Big and how the words couldn’t have been more true. This camp wasn’t easy for him. He came home day after day, utterly exhausted. The days were longer and more grueling than either of us anticipated. Then there was a homework assignment each evening, helping to reinforce that academics play a key role in success. Going into the week, he only had one friend at the camp, and from day one they were placed on opposing teams.

But each morning, he got up and walked out the door with a smile on his face. When I picked him up, he talked about his new friends. He talked about the games and who made great plays. He talked through whether he thought it was more important to be a showy player or a team player. He even realized that certain coaching styles don’t suit him because he finds it hard to concentrate when coaches are shouting. While I signed up hoping he’d have a fun week, it was so much more than that. Big came out a stronger basketball player, a more self-aware athlete, and a more confident boy. Not because the camp forced him to, but because he chose to really give it his all—on and off the court.

I suddenly realized, my problem isn’t with blogging or this conference. My problem is that I haven’t been willing to truly commit. BlogHer isn’t easy for me because I find it overwhelming—the crowds, the choices, all the new faces. In the past, I’ve played it safe, I haven’t planned my time well, and, frankly, I haven’t given it my all.

So next week, as I attend BlogHer ’14 in San Jose, I’m going to take a page out of Big’s book. I’m going to do everything in my power to make this experience count. I will make my family—and myself—proud. I will go in with wide-eyed wonder and walk out with a win. Not because the conference will force me to, but because I am choosing to.

Because any opportunity I have to stand in the company of great writers with a pen in my hand is a gift.