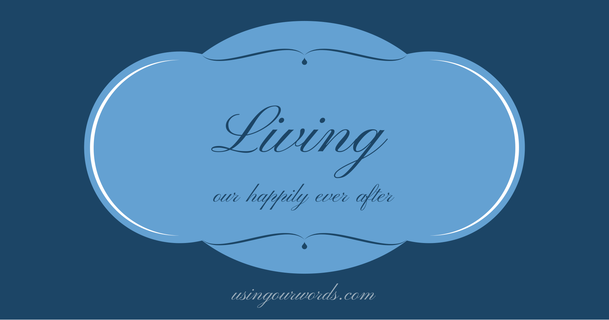 Pink asked me this most innocent question the other day as I was overwhelmed by yet another mess, and she was rocking her own beloved baby doll in her arms.

“Mommy, does Cinderella have babies?”

I immediately pictured the perfectly quaffed updo and glorious blue gown, laughed, and said a flippant, “Um, no.”

Seconds later I was relieved to discover that Pink was so wrapped up in her adoration of Baby J that she didn’t hear me. That she didn’t know I dismissed the idea, implying that my life was less than the woman’s she wants to be when she plays imaginary games. She finally looked up with big expectant eyes, awaiting my answer to her perfectly logical question.

Me: “What do you think? Do you think Cinderella has babies?”

She was satisfied enough with her own answer to the question, and went on with her rocking and adoring.

You see, like so many little girls these days, Pink loves princesses. This week it’s Ariel, Cinderella, and Tiana. It seems any time she’s dancing, singing, or with her dolls, she’s announcing she’s one of these lovely ladies. What she knows of them, at least. She’s never seen the movies—she’s too impatient and not all that interested really. We sometimes read the stories in a hand-me-down collection book we have, but she rarely makes it to the happily ever after since she likes to “narrate” her own story based on the pictures. But these pictures, they don’t include a baby or two. They only show a beautiful woman with her prince. But still, she wondered, as three-year olds will do.

Honestly, I’ve always read “happily ever after” as “the end”. I haven’t given my imagination—my storytelling soul—an opportunity to think about what that could possibly look like. For Cinderella—or for me, for that matter. But now that I’m long past the age of princess adoration, I know that wedding bells aren’t an end, they’re a beginning. (And I’m not talking about a sequel, my friends.)

I have an opportunity here, I’m realizing. Because while I’m not a huge fan of the princess culture, the fact is, Pink is deep in it. So rather than fight it, I’m hoping I can embrace it, and use it to help her understand my version of happily ever after. (Plus I can’t help but hope that, one day, she’ll learn more about life from her mama than a fanciful character in a story.)

Maybe not in my words, but in my actions. Because while I’m certainly not a princess, I do believe that I’m living my dreams come true. And I want her to know that. It’s just that sometimes that’s just a bit more difficult to see, and express.

It’s in knowing that this life—the life the five of us are living side by side, day after day—is my happily ever after. Not because every moment is perfect. But because there’s real beauty in imperfection. There’s heart and depth in honesty. And there’s love in this house that can’t be contained in the pages of a fairy tale. Even on the days when I look a lot more like the scary witch than the princess.

Have you liked my Facebook page yet? Or subscribed to receive my posts via email (over there in the right hand column on the blog)? I value your time and this community, and hope you’ll choose to be a part of it one way or another.