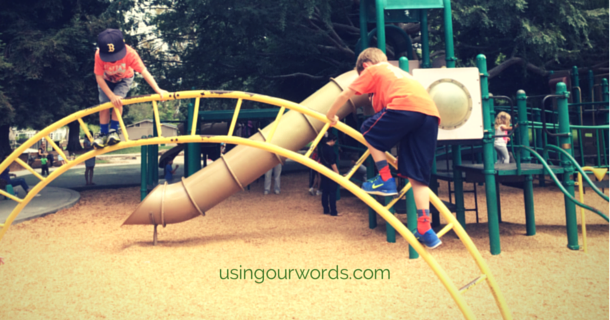 I remember it well, my smugness. The way I’d look at those outrageously misguided children and wonder why their mothers hadn’t taught them any better. I’d flash them a stern look, maybe shout a passive-aggressive, “That’s right Big, we go up the ladder and down the slide!”

These kids? Well, as far as I was concerned, they were monsters.

First of all, they were big. No, huge! There was no question they had the strength to flatten any number of precious little people. They were a threat to everyone around them what with their climbing up and over, as they tested the limits of playground equipment and rules and basic manners.

But even worse, they moved with outrageous speed and dexterity—with no apparent concern for gravity or grip. Who in their right mind thinks it’s a good idea to climb up the outside of a tunnel slide in flip flops? Only a monster, of course.

Well, this past Saturday, I heard, “No honey, you don’t get to climb on top of that. It’s big and slippery, and very dangerous. You could fall and get hurt!” I knew that voice, that tone. They were mine, from years ago.

It wasn’t until I looked over with an understanding smile that I realized the horrible, terrible, monstrous influences were my very own kids. And worse? I wasn’t one bit alarmed by what they were doing. But, having been in that mother’s shoes, I went over and explained to my kids that they needed to be leaders, to show little kids the correct way to use the equipment.

The other mother looked at me—with a combination of exasperation and gratitude on her face. And I put a friendly, apologetic look on mine.

Because I get it. I get where she was coming from, and I have a new understanding of where I am now. You see, even I have climbed on the outside of slippery situations in flip flops at this point. Not because I didn’t know better, but because having a few extra years of courage and strength have given me the ability to gain better footing, to know the risks, and to take them anyway. I’ve experienced more ups, overs, and limit testing than I can quantify in my almost 9 years of parenting experience.

And parents of older kids, and those kids themselves? They’re not so bad after all. They’re just a bit more capable, trusting, and curious than they were when they explored that very same place years ago. And as a mom, watching your kids conquer new challenges and maneuver with confidence is just as thrilling as they get older as it was when they were toddlers. Because while it might seem like they don’t know their physical limits or the rules, the truth is they finally do.

So while my big kids may slip now and then (heck, don’t we all?), they’re definitely not creatures to be feared. At the city park, or anywhere for that matter.

But those monsters walking through town when high school’s dismissed? Well, that’s another story.