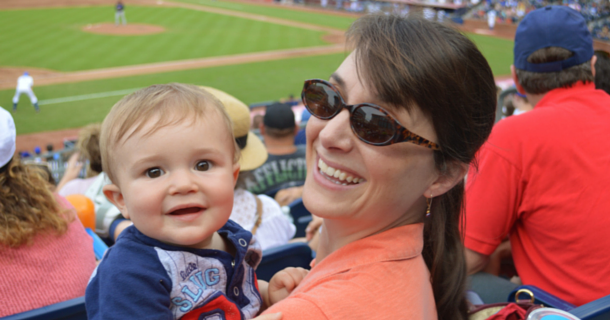 Last September, my friend, Kelly, wrote a letter to her son in anticipation of her second child’s birth that she shared on Facebook. Right then and there, my Reader Feature series was born. I knew moms everywhere could relate to her beautiful words and I had to share them. Recently, just a little over a year later, she wrote her baby boy a letter in honor of his 1st birthday. Again, I’m honored that she’s letting me share it with all of you. So grab a tissue and soak up her words, which are a gift to us all.

I dreamt of you before you were born. Yep, I dreamt I gave birth to a walking, talking, one-year old baby (who came out wearing a diaper!), and my first words were, “I missed it!!” You see, the memories of your brother’s first year of life were already beginning to fade, and I was worried that your first year would go by so quickly that I would miss it before it even began.

It’s funny, then, what I ended up feeling like I did miss during your famous “one-minute birth.” I’m sure there will be many times over the course of your life when you will hear the story of your quick delivery (and it really IS a remarkable story that is fun to share). But the truth is that your birth was an overwhelming experience for me, and one of my first immediate feelings was that I didn’t live up to being the mother I was “supposed” to be, even in your first moments of life. You see, I was trying to live up to the image of a stranger, a simple picture that caught my eye once and was ingrained in my memory—the picture of a mother cradling her newborn baby for the first time. I wanted to be that mother; to embody the look on her face, which captured it all…the joy, the gentleness, the absolute awe of holding your baby for the first time.

But instead, I reached out to you with what the doctor said was a “deer-in-the-headlights” look, and all I said over and over again was, “He missed it!!” As you will probably be told many times, your dad was retrieving my I.D. from the car, and I was distraught over the fact that your dad was absent, we were surrounded by strangers, and my body was shaking uncontrollably from the intensity of what just happened in such a short amount of time.

I had to shut my tear-filled eyes just to concentrate on holding you so I wouldn’t drop you. Your life was just beginning, but it wasn’t what I pictured. I wasn’t what I pictured. And soon after your birth, I began to inwardly chastise myself for not being the mother I promised I would be—for not living up to the image I had chained myself to recreating. But if your brother’s life has taught me about faith, then your life has taught me about faith’s forgiving partner—perspective. Paxton is my visual manifestation of what is unseen, and you, Camden, are teaching me how to see. What’s amazing is that, when I look back, the lessons began even before you were born.

It’s no secret that having a baby wasn’t easy for your dad and me. So when Paxton came along we were overjoyed that our cup seemed to “runneth over.” But soon, I wanted more. I wanted you. But somehow I couldn’t forgive myself for that…for the “wanting more”…when our prayers had already been answered in such an abundant way. So I went to talk to someone. (I was nervous about it, but I hope my example will teach you and your brother that it’s always okay to confront you inner-most feelings by reaching out to others to help you.)

I talked about how I was so grateful for your brother, but that I didn’t know how to stop the feelings of wanting another child. You see, I didn’t feel grateful enough, and that’s what gave me the guilt…the “not enough.” But I will forever be grateful for the five words this woman gave me, that have become a mantra for those times I’m overwhelmed by what appears to be a conflict of emotions. She said simply, gently, and compassionately, “You’re allowed to be both.” Upon hearing those words, my heavy heart lifted, and a lightness filled me. I had permission to be intensely grateful for your brother AND intensely long for you, even at the same time. It was a relief, and a forgiving perspective that my guilt had prevented me from seeing.

Grace, for me, has been the reminder of that forgiving perspective. And grace came to me by way of my best friends’ words just hours after sharing the news of your arrival. As I shuddered at how quickly you came into the world, the fear that accompanied it, and how “alone” we were, my dear friend sent me the words, “I love that you had your whole little family with you in the car.” And another friend chimed in, “I agree. Such a sweet part of the story.” Those words lifted my heavy heart once again, because it was a perspective I hadn’t allowed myself to see.

It’s true…I didn’t welcome you “alone.” In fact, your intense arrival is what made not only your dad and me a part of the story (he did get to cut the umbilical cord, after all), but your brother, grandmother, and great-grandmother, too. They each played a role in bringing us safely to the hospital. In fact, a midwife explained to me that having Paxton in the car, and trying so hard to be quiet and not scare him, could in fact be what saved me from giving birth to you in the car! And those “strangers” in the room with us? Well, they were meant to be a part of the story as well.

You know, there are words and phrases, meanings and definitions that you can hear over and over again in your life, that can be understood with a new perspective when they are wrapped up in a new experience. I have taken enough yoga classes over the years to hear time and again, “Concentrate on the breath,” or, “Breath is life.” And the phrase, “Breathe life into it,” had just become a common metaphor. But in the weeks that followed your birth, I remembered the nameless, faceless stranger, the one who gripped my hand, drew close to my ear, and whispered in the darkness behind my closed eyelids…”Breeeeeathe.”

And that was all it took…in one breath, you were here, and your life began. But grace, the forgiving perspective, had to remind me of that moment, because the overwhelming fear had misplaced it. I don’t think it’s a mistake that I never saw the face of the stranger who whispered the word, “Breathe” into my ear that day. It’s been said that nurses are angels, and I feel certain now that an angel has held my hand. The Giver of Life bestows upon us the breath, and in my most fearful, panicked state, that angel reminded me that it was all I really needed.

A friend recently shared something she had heard with me, and it resonated so deeply. (Sometimes the simplest ideas are the most profound, yet take us the longest to learn.) It was the idea that for thousands of years we have relied upon the “Word” to sustain us, but now we have replaced the word with “Image.” I was reminded once again of your birth, of the lenses through which I perceived it. The truth is that when I tried to live up to a recreated image of the perfect mother, and do it alone, I fell short of the enormous expectations. But when I listen to the words surrounding your birth…”breathe,” “sweet,” “family”…and the cacophony of voices from strangers and loved ones alike…a real image emerges…the one of your miraculous welcome into the world.

And now the proverbial dance has begun, in the giving and receiving of life. As you laid gently on my chest one day…sleeping…I realized, sweetly, that I had the seemingly mundane, yet beautifully distinct privilege, of having watched your eyelashes grow. This happened over many hours strung together of when your tiny body curved over mine, cushioned by your pillowy cheeks, and our breaths were synchronized, ebbing and flowing as one together.

But, as happens with every mother and child, there will come a time when we take a final, deep breath in, and we exhale…fully, completely, and independently. It will be the breath where I release you, not from love, but in trust…the moment our dance ends and your life becomes your own to lead. I can almost feel the shudder of that moment…the enormity and the brevity culminating in that perfect moment of clarity…that’s when the gift of perspective you gave me will be handed back.

And when I see the excitement and fear in your own eyes, a feeling of nostalgia will wash over me…“You’re allowed to be both.” Then when that blessed realization hits you, and the laughter and the tears flow simultaneously, my heart will recognize it…the chance, the privilege, the grace…to look into my sweet baby’s face…with joy, gentleness, and awe…and tell you for the first time, all over again…your life is just beginning.

(Whenever I hear this song I will think of you, as it captures the essence of your gift of perspective. These are my favorite verses.)

Rows and flows of angel hair
And ice cream castles in the air
And feather canyons everywhere,
I’ve looked at clouds that way.

But now they only block the sun,
They rain and snow on everyone
So many things I would have done,
But clouds got in my way.

I’ve looked at clouds from both sides now
From up and down and still somehow
It’s cloud’s illusions I recall
I really don’t know clouds at all.

(This quotation almost took my breath away when I first read it.  It was as if someone took my feelings about you and set them to the perfect words.)

But the last one: the baby who trails his scent like a flag of surrender through your life when there will be no more coming after-oh, that’s love by a different name. He is the babe you hold in your arms for an hour after he’s gone to sleep. If you put him down in the crib, he might wake up changed and fly away. So instead you rock by the window, drinking the light from his skin, breathing his exhaled dreams. Your heart bays to the double crescent moons of closed lashes on his cheeks. He’s the one you can’t put down.

A bit about this lovely gal: Kelly lives in Durham, North Carolina, and is a stay-at-home mom with her two boys. She also works part-time as both a book coordinator for a leadership trainer, and as a local food tour guide. She is also part of a book club, but never seems to find time to read the books between chasing after her sports-obsessed toddler and entertaining her baby who never naps. After “surviving” the day-to-day as a mom, she does her best to reflect on each day with a fresh, forgiving perspective.