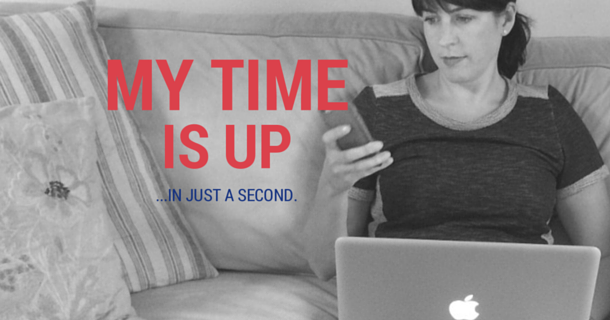 Rules have always kind of been my thing. I mean, I hate to brag, but I’m really, really good at them. Not only can I follow them, I can tell other people to follow them, and—ever since I became a mom—I even get to make them. While I’ve tried not to get too caught up in my law-and-order personality as a parent, there are a few solid(ish) rules in our house.

Screen time is one of them.

I think our house rule for the kids’ screen time is pretty generous. They get to watch one show in the morning, one in the afternoon, and one before bed. One TV, three kids, three shows.* Since we DVR shows, they fast forward through commercials, and each show ends up being about 20-25 minutes. Pink doesn’t pay much attention to the shows Big picks, and is often still asleep since he gets the morning pick. And Big often asks for a screen-time alternative during Pink’s evening show—like teacher-approved computer games or story writing on my laptop. Sometimes Little will trade TV for Club Penguin. So an hour, give or take 15 minutes, seems reasonable to me.

I like to think our system is clear, simple, and well adhered to. Yep, my kids know the rule and follow it. (Ok, they beg for more TV and to play on my phone a lot of the time, but I almost always say no. The broken Wii and our iPad hoarding don’t hurt either. Rules are rules, people.)

So, the other day, when Pink and I were heading to the store and I asked if she wanted to bring her baby, her response was kind of a slap in the face.

“No. Just my phone.” She barely looked up from the old—no-longer functional—Blackberry in her hand. The one that usually lives at the bottom of the dress-up bin.

“But what about your babies?! You looooove your babies!” I wanted to shout. Then, my mind quickly hit rewind and played through the morning. I remembered our dance party to Shake it Off where she mirrored every single one of my moves. (Who can blame her? The moves were pretty spot on.) I thought about how when she got dressed, she wanted to wear a pretty, long dress—like the one I picked up off the floor in my room was wearing.

And that’s when it hit me. I’ve been a big fat rule breaker!

Ok, not technically. (Phew.) Nobody made a rule for me about screen time. One day I was just suddenly an adult and I could do whatever I wanted. Then someone went and invented the smart phone. (You know, that little rectangle that appears to be sewn to my hand?) And, at age 3, she hasn’t started keeping a catalogue of my faults, so she still wants to be just like me.

So, I’ve come to the realization that it’s finally time for me to make some rules for myself. And to remind myself that I’m really good at following rules. Because even if the screen—and all the emails and weather updates and answers to kids’ questions and articles and blog post notes and photos—that come with it are right there at my finger tips, I don’t have to click.

But I do have to be a good example to my kids. And now—before they’re holding devices of their own—is my chance to show them that screen time isn’t a way of life, it’s a very small part of it.

Do you have screen time rules? If you’re looking for ideas on how to manage video games, TV, iPad, and more in your house, Common Sense Media offers great insights and ideas here.

*Since rules were made to be broken, all bets are off if it’s college football season, a favorite team is in the MLB playoffs, or Big wakes up at 5am on a Saturday, Sunday, or Monday through Friday.

This post was inspired by Common Sense Media’s Screen Time Topic Center. As a Common Sense Media Learn ON Ambassador, I’m honored that I get the chance to share Common Sense Media’s great work. This non-partisan, not-for-profit company is helping parents everywhere navigate the new digital landscape, and even the most tech-savvy people I know turn to them for help. I hope you will too.