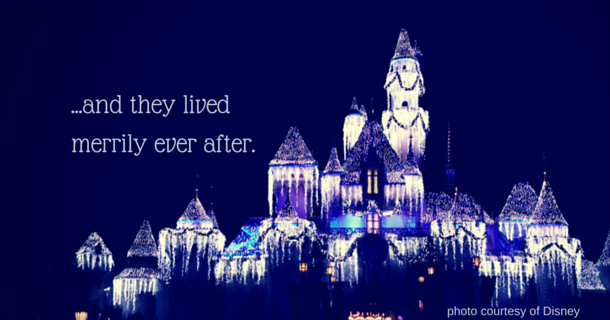 I was honored to be invited by the Disney Parks team to their Disney Holiday Blogger Event. They graciously hosted our family for three days and two nights of #DisneyHolidays fun. All opinions are my own. Be sure to read all of the posts in my Disney Holiday series for tips and ideas to make the most of your time at the Disneyland Resort.

Our family is the type that’s pretty rooted in reality. It’s not that there’s no place for fantasy or magic or imagination, but that’s just not where we live. (Ok, maybe Little does, but even he’s got his analytical moments.) Instead we continue to prove that life is (far) less than perfect, and that’s absolutely ok. Heck, it’s hilarious most of the time. Yes, our lives—and certainly our holidays—tend to be a lot more Griswold than fairy tale.

So, when our family was invited to attend the Disney Holiday Blogger Event, I gladly accepted knowing we’d have a wonderful time, but not thinking I’d start throwing around words like “magical” and “spectacular” for three days straight. Especially since we were just in the parks in April…I mean, how much could really change in a matter of 7 months?

It turns out, a lot had changed. Our kids, for starters.

The first time I took Big to Disneyland, he was wide-eyed and tentative. He knew his limits, and though there were many, we still loved it. But this trip? Well, he acted like an old pro. He was the one encouraging his brother and sister to try new things because roller coasters (well, some of them) and even rides that are in the dark are so. much. fun! (Really?!)

While we were there, Little turned six. He also turned fearless. He raced onto Big Thunder Mountain Railroad and the Haunted Mansion Holiday—two rides he wouldn’t even consider in April—without so much as the blink of an eye. And, they were both deemed his favorites the second he came off. While I would never have imagined we’d go to Disneyland for a family vacation at this point with three (highly sensitive) little ones—let alone two times in the same year—it proved to be the perfect experience. The first trip gave Little the chance to soak up all of the excitement surrounding him. The second gave him the confidence to be in the middle of it all. And I’m pretty sure I was almost as proud of him as he was of himself.

Even Pink had an entirely different experience this time around. We were all thrilled to discover she hit the 40-inch height mark, and that opened up a world of opportunity for her. So maybe she didn’t love Radiator Springs Racers (oops), but she couldn’t get enough of Toy Story Midway Mania. And while watching the parade wasn’t even something we thought to do on our last visit, it was one of the holiday highlights for our little princess. That dimpled arm didn’t stop waving for 40 minutes straight.

But the real shocker? It was me. I’ll be the first to admit that my fear—of crowds and lines and chaos and bizarrely cheery people—has held us back in the past from even having Disneyland on our radar as a family destination. (Let’s be real, even the grocery store can be a bit much for this crew.) But I’ve been proven wrong. We totally rocked the happiest place on earth, and have the sore cheeks and legs to prove it. Whether it was making a thrilling trade for a seemingly random collector pin, or shouting, “Can we go on this again?!”, our kids were all lit up inside. And it was magical for me to watch them.

Our family wasn’t the only thing that changed since our last visit though. When Disney does anything, they do it all the way. And, well, Disney Holidays was truly exceptional. The music, the lights, the joy, the celebration, the food…wow. In my head, the holiday experience was going to be some twinkle lights, garland, and Mickey in a Santa hat. In reality, it was a full-blown celebration that turned even this Scrooge into a believer. (And there may have even been multiple episodes involving me and tears of joy. I know.)

While I’m working on some more logistical tips posts for those of you planning to go this season (the holiday fun continues until January 6th, so it’s not too late to plan a getaway…maybe even consider it for a holiday gift experience), here were some of the highlights for our family:

There was so much more to the fun and memories (and drama, of course), so stay tuned. Whether you’re planning to go this year, or considering a holiday trip in the future, I’ll share everything we learned (which—outside of the perfectly planned blogger event—was mostly the hard way…with a side of dumb luck) soon!

Have you been to Disneyland during the holidays? What’s your favorite magical touch?

Tips for Sensitive Kids at Disneyland

Disney Social Media Moms: A Love Letter to Our Family

5 Things I Learned About Branding From the Cars Experience