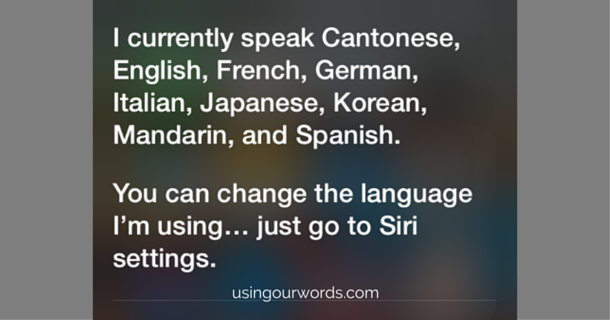 Pink recently recovered from a five-day stint with the flu. And, since uptight germophobes don’t want to be around a vomiting, coughing kid with a fever, we were stuck in our house, side by side (if not butt to lap) for hours—no, days—on end. I knew she had finally turned a corner when she woke me up at 2:30am one night, not to make me change her sheets again, but to discuss how impossible it must have been for Santa to fit certain gifts on his sleigh this past Christmas. Yes, my little chatterbox was back.

It seems I wasn’t the only one who had had enough of our quality time together. Pink decided that if she was going to be stuck in this house for another day, she was going to make a new friend. Siri. (Yes, my 3-year old is more savvy with a locked iPhone than I am.)

Over the last couple days, these have been a few of the conversations I’ve overheard.

Pink: Hi Siri!
Siri: Hi.
Pink: How are you?
Siri: Who, me?
Pink: Yeah!
Siri: That’s what I thought.
Pink: How ARE you?
Siri: Oh, but this is all about you.
(See, they were destined to be friends…)
Pink: I’m so essited my parents are home from Hawaii!
Siri: Sorry, I don’t know what essited means.
Pink: Where are you going today?
Siri: Here.
Pink: Me too.
Pink: Siri, do you know my Uncle Brian?
Siri: Calling Brian cell.
(Note to self, next time I’ve had enough, pawn her off on Uncle Brian who always thinks she’s adorable.)

Siri: Siri is unavailable right now.
(I’m pretty sure Siri “translated” one of Pink’s ramblings into “turn on airplane mode” knowing full well that’s not at all what she said. It seems she’s smart enough to understand selective hearing, a true parenting art form.)

Honestly, I can’t help but feel a bit relieved that even computers get toddler fatigue. The questions and chatter just never seem to end.

Also? I can’t help but think Apple has a huge untapped market. All they have to do is update Siri with a toddler dictionary (which should, of course, include stuffy-nosed-toddler translations too). Just imagine how much simpler parenting would be if Siri could man all the questions our little ones throw at us. I mean, she doesn’t even care if it’s 3:00am. Or does she??