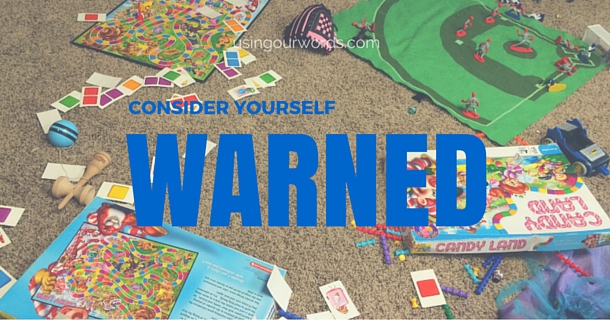 Five glorious words I thought I’d never — ever — hear came rolling out of Big’s mouth one Sunday afternoon this summer. I have no idea what inspired it, but I certainly wasn’t going to question the universe rewarding me for nine years of the exact opposite behavior from this child. I mean he was even removing the ladder from the bunk bed so that he could make sure every square inch of their 8’x10’ rug sparkled.

Lenny and I were basking in our awesomeness as parents — him, especially, given that he’s the neat freak in the family and thought his ways were finally rubbing off on somebody (other than Pink) — when we heard a huge thump.

Little walked into the living room, as white as a sheet saying, “I think I broke my arm.” You see, he’d wanted to prove that you don’t need a ladder to get up to the top bunk. Success! But, in the 10 seconds he spent pretending to make the bed in solidarity with his brother’s cleaning efforts, he’d forgotten the ladder was missing and fell to his fate.

While most logical people would say, “But he isn’t even crying. It can’t be broken.” I, the overly dramatic mother who has heard this child respond to something as nothing as his brother blowing on him like he’s been shot in the foot said, “Oh my gosh, he’s not even crying. It must be broken.”

This is where things get a little fuzzy. You see, the room started spinning and — with my head stuck between my legs in the hopes that I’d at least stay semi-conscious through this ordeal — I became totally unable to assess the situation, much less comfort the injured party.

In less time than it took me to come back around from my fainting spell, Lenny and Little returned from urgent care. It turns out being in shock from a major fall doesn’t equal a broken arm. Heck, it doesn’t even require x-rays. And the best part of a measly bruised arm is that it doesn’t even keep a kid from tackling his brother immediately upon his return. Of course it could have been much worse. We were lucky. So, you know, just to be safe, Big hasn’t vacuumed again.

Last week, I dropped Pink off for her last first day of preschool ever and headed to the dentist to have my teeth cleaned for the first time in…well, far too long. You see, this visit served a dual purpose. One, it gave me something to be more miserable about than my kids growing faster than I can say…well, anything really, as long as you insist on asking me questions with tools propping my mouth open. Two, it made me feel like I was taking care of myself after a year plus of overall, accidental neglect.

But here’s the thing. Not only did I end up with clean teeth (yay!), I ended up with an appointment for a root canal on my calendar for, you guessed it, today (boo!). And, yes, this absolutely explains why I was avoiding the dentist for…well, far too long.

This is the point in the life where I become well aware that I constantly say things to my kids like, “How many times are you going to [make that mistake] before you learn your lesson?!”

Yes, if you fill in that blank with “clean”, it totally applies to me. But I still can’t help myself. I know. It’s my own damn fault.

So last Friday afternoon, instead of letting my kids engage in their own vices, I forced mine upon them. “We’re not doing anything today until you guys clean up the playroom.” Since I’m obviously one of the “guys” in this case — the most effective one at that — we got busy.

Within what was probably a matter of minutes, but felt like hours, the whines and moans of overindulged children were replaced with gleeful sounds. Things like Pink shouting, “Hey, Little! Let’s play baby baseball!” See?! Clean is better. It brings people together.

Until one of those little people trips in a funky way. Hard. Hard enough to fracture a bone in her foot. Which has made life a bit more challenging for all of us.

So, from now on, if you come to my house and it looks like I have something against cleaning, it’s because I do. Or it has something against me. Either way, I promise it’s not that I’m just lazy. It’s that I’ve finally learned my lesson. And I’m putting my family’s safety first.