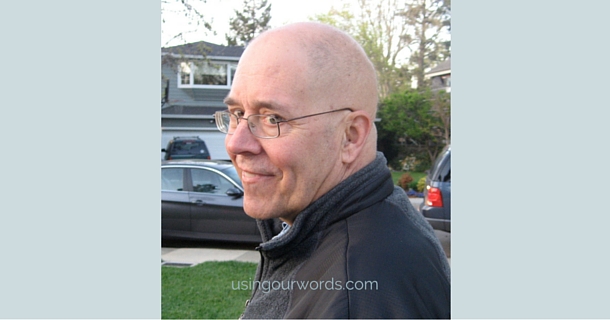 She was doubled over in a fit of laughter the other day when she said it. I had just told her I wasn’t the best tickler in the whole world, he was.

“Grandpa John?! I don’t even know who that is!”

Four years. Today it’s been four years. It seems like yesterday, but the truth is, it was a lifetime ago. Her lifetime. Pink was just 5 months old when he passed away. Of course she doesn’t remember him. And she doesn’t know better than to say as much. She has no idea that her words are sharp. That they cut like a knife.

Big, on the other hand, he knows. He understands that I want him—I need him—to love his grandpa as much today as he did when he was alive. He was only 5-1/2 years old back then, and he aches to remember—still sleeping with his grandpa’s special pillow each night. Quietly carrying on my dad’s legacy of being especially kind to the kids who are handed life’s more challenging paths.

Recently I was telling Big and his friend a story about my dad. And while I don’t even remember what the story was, I’ll never forget Big’s response. “Yep, that sounds like him!”

Big’s words, Big’s actions, they rest in a happier place in my heart. Where my dad is alive and well. Where two of my kids still remember the man who spent his life adoring me, adoring them. Where I still remember him.

While I don’t want to force-feed my family memories, the truth is, I’m afraid I’m going to start to forget things if I don’t talk about my father. About who he was and how much he meant to me.

You see, I’ve found that for the most part, when a loved one dies, his flaws, the things that used to make you roll your eyes or grit your teeth, they disappear too. Because you totally let go, you stop talking about them. I haven’t spent a moment in the last four years thinking, “Thank goodness I don’t have to listen to him whistle when he gets frustrated any more!” I haven’t forgotten that my dad was imperfect, or tried to turn him into an accidental saint. But I simply want to honor that he was a truly great man, in spite of his flaws. To shine a light on the beautiful parts of his heart and soul—the ones that made everyone around him feel so gosh darn special.

And while sometimes the grief can feel like a weight I don’t want to carry any more, the idea of letting go of it feels even scarier. I’ve seen what happens when you let go, when you let things get lost in the shadows. It seems to me that in the raw, heightened emotions of grief, everything is more vibrant. Not just the pain, but the joy. The memories. The love.

So I allow myself to really feel the grief. To cry. To love. To remember. Four years later.

And while Pink may not have memories of my father, I could have sworn she was channeling him last week when she said some very different words to me. Words that floored me, because she had no idea the weight this particular Monday would hold.

I answered with the words I learned years ago, when my dad was sick, “When you get really old, your body stops working. Your heart doesn’t beat any more and you die. You go away and you’re not here anymore. Like Grandpa, my daddy. He got really sick and his body stopped working. So he’s not here with us any more.”

Pink started getting teary and wiggling in her seat when she whispered, “Is that going to happen to us?”

“Yes, but not for a very long time. You’re only 4 years old. You have a lot of days left to live, so that’s why we have to be happy and make the most of every single day. Right?”

There was no hiding her great dimples, that were also my dad’s dimples, when she smiled and replied, “Yep! Even Mondays!”

So today, I’m going to make the most of this day, this Monday. I’m going to be a bit more gentle on the loved ones still in my life. I’m going to shine a light on the beautiful parts of their hearts and souls, rather than getting caught up in their flaws. Now. While they’re still beautifully imperfect, living creatures.

There’s no doubt in my mind that that’s what my dad would want, because that’s the way he chose to live. And I realize I have that choice too. Even in the grief.

RELATED POSTS:
To Dad, With Love
Superman’s Heroes
I’m Alive
Tips for Talking to Your Kids About Death and Illness
Hundreds of ButterfliesUnprepared…3 Years Later
How to be a Friend to Someone Who’s Grieving