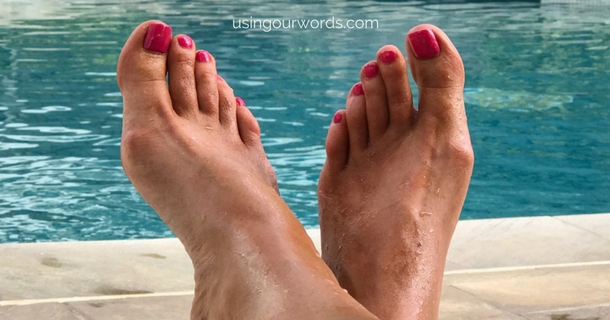 You can imagine my excitement when Lenny came home from work one day a couple of months ago and told me to start packing — we were going on his company’s sales reward trip again this year. (He knows I’m a procrastinator, so he had to say this months in advance with the hope that I would actually have a suitcase packed come February.) You can also imagine my horror when I realized going on this trip meant I had a couple months to lose the 15-ish pounds I’ve gained over the course of a couple years. Yes, this trip would require me to sit poolside in Hawaii with his skinny-ass female colleagues and the mens’ skinny-ass wives.

See, last year I had a bit of a bikini reprieve, which is how this weight-gain thing got so out of control (well that and my dramatically increased food and wine consumption which I blame on the whole building-a-house-stress thing). Since last year’s reward trip was in Whistler, I covered my newfound bulk in layer after layer of snow gear. (And, quite frankly, that bulk may just have saved my life when I was thrown from a dogsled…but that’s another Go-Pro video for another day.) As for my chubby cheeks? That was just puffiness due to the elevation, obviously.

But this year, there would be nowhere to hide it all. Nope…that bulk would be hanging out there in all its glory.

It turns out that at age 40, it takes a whole lot more than wishing you’d lose weight to actually lose it. Ok, maybe it always has, but I’m getting old and forgetful. And by the time I remembered, it was too late. So I went with the next best solution. A spray tan.

A spray tan would make me look and feel better, my friends assured me. That’s what friends do, you see. They lie to you to make you feel better about yourself. That’s why you keep them around, even after you get that spray tan and realize you don’t look skinnier at all. Deep down you’re ok with the fact that your friends weren’t entirely truthful. Because you know you’ll need a peptalk again soon — and, when you do, you’ll turn to those very same friends. You know how I know this? Because one of my friends who talked up the spray tan miracle? She also happened to be the first person to tell me how great it looked.

I was greeted at the salon by a gorgeously golden, stylish woman who took me to a tiny room filled with mirrors and lights. After showing me where to put aside my belongings and my pride, she kindly ducked out. She wanted to keep this whole process discreet, of course. After stripping down and exploring 101 different ways to stand so the mirrors wouldn’t the reflect bits and pieces I was hoping to hide from my line of sight — not to mention the entire island of Maui, come tomorrow — I started to feel awkward. Like I was being watched. Turned out, I was.

Right there on the other side of the room at belly button level was Chris Pratt. He was in an equal state of undress, staring me down — pre-tan, no less! The only thing that kept me from losing it right then and there was that I realized the reflection off my Irish white skin was blinding him. Why else would he be making that bizarre squinty face? A little magazine rearranging and I was back to breathing. 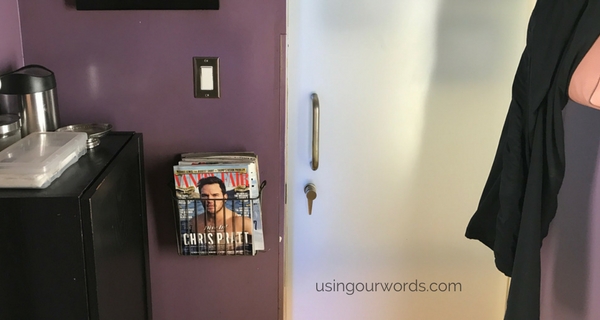 Just when I felt a tiny bit less creepy again, my fake-sun fairy godmother returned and told me to spread my arms and legs like a starfish so she could start waving her magic wand. I held my breath and let her go to work on turning this pumpkin into a mermaid.

As we chatted, she sprayed every nook and cranny possible with organic something-or-other. (I do live in the Silicon Valley, after all.) Turn front, turn back, bum out. As she said it, I did it — and then I remembered why I never really got around to working out. All this moving around was exhausting.

I couldn’t help but think if she was as good at spraying as she was small talk, I was going to look the best I had in decades. That’s when she looked me up and down with a frown and said, “Hmm, let’s get that belly a bit more, shall we?” I wanted to explain that I’m not pregnant nor a toddler, so maybe she could find another word to describe my middle, but I was too afraid I’d inhale some of my beauty potential, so I kept my mouth shut.

“Ok, you’re done. Just shower normally tonight or tomorrow, and don’t sweat…or, like, spill a glass of water on yourself.” We laughed. As if. And let’s face it, sister, the only reason I’m here at this point is because I don’t sweat enough. I’m good.

I got dressed and walked out to the front desk with my head held high. Then I forked over more cash than most online publications pay for a professional article and still felt like I underpaid after what she had to go through to get the job done.

I hopped in the car, opened a water bottle, and, about half way home — you guessed it — spilled a bit on my arm. There was now a white stripe on my tan arm. A fat, white stripe. On my now skinny, tan arm. After 30 minutes of clinically obsessive anxiety, I came to the realization that I’d just have to apply makeup to that spot for the next few days. Since I wouldn’t have kids’ lunches to pack, hair to braid, or outfits to veto on this trip, I could totally fit that into my morning routine. Phew.

I was back in action and feeling good about my new look when my family returned home from an errand. Little walked through the door and exclaimed, “Whoa!! You look orange. You know, like when I was a baby and could only eat carrots?” Gosh kid, I sure am gonna miss you.

This 8-year-old honesty came mere minutes before I saw my friend, the liar. So when she came to pick up Little for basketball practice, I knew she was just looking out for my fragile mental state (set off by a number of pre-trip dramas) by saying, “Wow, your tan looks SO good!” And I loved her for it.

When it finally came time for bed, I panicked. Sleep sweats. That’s my thing. (Well that and panicking and procrastinating and forgetting stuff.) I said a little prayer that the cool evening would do my tan justice and I fell fast asleep. Before I knew it, I was dreaming that I was trapped in a room with a horrible smell. I woke up in a panic realizing that smell was my fake tan. Man was I stinky, but I wasn’t sweaty. You win some, you lose some. I started breathing through my mouth and slowly drifted my way back to a sweat-free sleep.

When my alarm went off, I quietly headed into the bathroom to get ready. I switched on the light and saw a creature who looked like she’d been through an orange tie-dye machine. Dark spots here, oblong ovals there. I grabbed a washcloth and immediately started rubbing my arms, trying to blend the chaos back to a more, well…solid orange. If my morning eyes weren’t deceiving me, it was working.

The real test would be much later — you know, after five and a half hours of nearly suffocating on my own stench in the middle seat of an airplane. When the time finally came, the sun was high and the coverage was low. I doused myself in sunscreen hoping that would help blend any spots I missed and sat down on a lounge chair. As I glanced down to admire my bronzed bod, I quickly discovered that the solution had settled in each and every one of my hair follicles — especially the ones that had been ripped free of said hair in an equally demoralizing appointment earlier in the week. And while my skin may be Irish, my hair allotment is a bit more Italian. (Ok, so I don’t know if I officially have any Italian in me, but my body seems to think I do.)

No problem, maybe a swim would even things out. (Ok, I didn’t think it nearly that coolly or calmly, but that was the gist of it…) I took a dip, then returned to the chair the cabana boy had set up for me. Nothing had changed, it seemed, except that my water glass had literally runneth over — yet again — thanks to the award-winning resort service. Ahhh… Yes, it was time to let it go. Enough with the tan-xiety.

That’s when Lenny sat up and made a disgusted face. “Gross! What’s all over this towel?!”

“You should really ask for a refund.”

Instead, I asked for a cocktail. And in my mind I toasted a hard-working devoted husband, friends who see the best in me, and even my spotted-and-streaky self. This is a pretty great life, I’ve got — whether I’m fluffing the towels or the cabana boy is.

So for now, I figured, I might as well enjoy livin’ large.