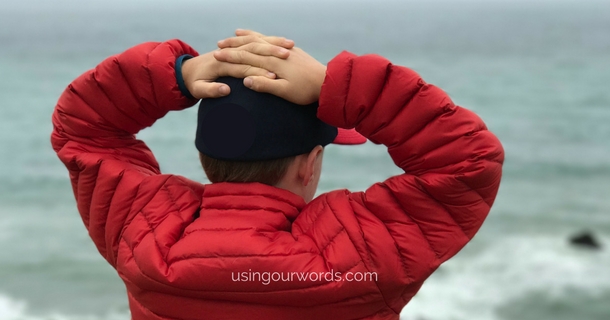 If you open Big’s bedroom cabinet, you’ll find a pile of teeth. Six, to be exact. The collection started months ago, without warning. A silent strike of independence, I guess. His rebellion stands in stark contrast to Pink’s first squeals of post-tooth-fairy-visit delight — just down the hall.

When he smiles, you can see where his collection once belonged. In some places there are gaping holes. In others, awkwardly large white(ish) things jut in uncomfortably odd directions, as if in protest to the fact that they’ve been forced to live inside a child’s mouth.

When he was in kindergarten — as Pink is now — I remember shuddering at the mere sight of the 5th grade boys on the playground. They were just so…bulky. And rough. And un-cute. And, well, hard it seemed — with all their squish-able baby-ness living only in their mothers’ hearts and Facebook memories.

“It’ll be ok,” I promised myself back then. “That stage is literally a lifetime away — his lifetime, times two.” My silent pep talk always came back to: “I love him enough now that it will be ok to take a break from adoring him when he gets to the part with wired teeth, flexible eye sockets, and rowdy friends. It will have to be.”

Just the other night, an entire lifetime later, I walked into his bedroom to say goodnight. As he brushed his grown-up teeth and turned the key in his electric blue expander, I thought back to my giddy admiration of his kindergarten-ness.

I looked around his room, sighing, and giving my eye sockets some exercise. As usual, there were books all over his window seat. Dirty man-sized clothes covering the floor. And sheets tousled from restless sleep on a bed that hadn’t been made for days.

“How did we get here?” I wondered.

I absentmindedly straightened up. As I stacked the books, I looked through the pile his curious mind had been devouring lately. While a couple of Pink’s books made up of playful rhymes were mixed in — evidence that he’d given me the gift of a few more minutes in bed that morning — most of the pages told true stories of World Wars, death, heartbreak, and the most dreadful subject of all, puberty.

As I tossed his lifeless basketball uniform toward the hamper, I was reminded of his grace, grit, and leadership on the court during his last couple days of hard-earned victories. As I straightened his sheets I uncovered his collection of still-adored stuffed animals, one by one. I also stumbled across his songwriting notebook, and discovered scribbles of lyrics including, “What’s on the outside doesn’t count, it’s what’s on the inside that really shows.”

He flung himself into his room and onto his bed. “Mom, will you hand me my grandpa pillow?” I looked down to where he was pointing and tossed it his way. He took a deep inhale and wrapped his arms around it as he’s done every night since kindergarten — a lifetime ago — when I lost my dad, and he lost his best friend.

I sat down by his side and ran my fingers through his hair — now free of his latest must-have: styling gel. He mumbled good night and quickly disappeared behind a book.

I looked around again and realized right there, in that mess of a room, was everything I had been terrified of all those years ago. But, now that it was here, the only thing I hated about the moment was that I’d ever wished it away. While there’s no avoiding the fact that the signs of the baby I held in my lap are now quietly hidden, I adore everything about my big kid. Especially his metallic smile — not for its awkwardness, but for its ease.

How did we get here? I can’t help but watch this boy and think I did something — maybe even a few things — right. Because now, well, it feels like here is exactly where we were meant to be all along.

I wrote a slightly different version of this months ago as my Listen to Your Mother audition piece. I got the chance to read for the show producers and it was wonderful. While I didn’t get a spot in the cast, it was a new and exciting challenge for me, and a good lesson for my kids that even I can do something outside my comfort zone. I wasn’t sure I would publish this, I’ve been thinking about these things non-stop as Big says goodbye to 5th grade next week and thought perhaps a few of you might relate, too.