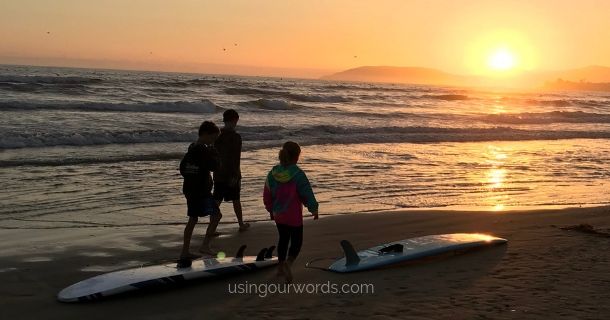 It’s been just four mornings of unwelcome alarm buzzing, lunch-packing squabbles, and tearful goodbyes (mostly to the dog, if I’m being honest), but it feels like we’re already full swing into this new school year. And each kid is off to a pretty great start, actually.

So, summer, instead of sending you off with a sad farewell, I’d like to say a heartfelt thank you.

You were good to us.

It’s not that you offered us one big adventure that we’ll talk about for months to come, or an exotic vacation that will land on our Christmas card come December. No, instead you patiently handed us a collection of small moments — ones that made us breathe more deeply, grow more confident, and squeeze more joy out of life.

Thank you for lazy mornings spent drawing rainbow cootie catchers/animals/birthday cards, cuddling the puppy, watching an episode of Fuller House for the 14th time, and playing cards. Thank you for giving me the wisdom to throw a grand plan out the window because biking downtown with friends sounded better than checking off a how-have-we-lived-in-the-Bay-Area-so-long-and-not-been-to-x to-do list. Thank you for spontaneous outings. Ones that had us gasping for (salt) air as we tested the limits of a 95-year-old roller coaster at 55mph, or played jellyfish toss — so we could all say we were a bit braver than we thought we were.

Thank you for giving me ages that allowed me to be wholly present, while being able to stand at a distance at the same time. For kids who called out, begging me to swim in the icy ocean or ride the questionably steep water slide with them. Not because they needed me, but because these totally capable humans wanted me to share in the thrill with them. Thank you for giving me the opportunity to watch, to cheer, to laugh, to try, to fail, and to laugh some more.

Thank you for giving me kids who would confidently venture off into the neighborhood friend collecting, allowing me to witness more pick-up wiffle ball games than I can count, and more impressively choreographed iMovie creations than I could have imagined. Thank you for giving them safe places to disappear for hours, only to check in for a snack or a change of clothes after the sprinklers came out to play too.

Thank you for giving us the ability to travel — to discover the magic of each spot was as much about the people we saw as the places we went. For connecting us with kindred spirits, swimming and laughing late into the hot summer nights. For not only giving our kids time with the friends they’ve adored since birth, but for allowing me time with my mom in Colorado, the place *I* was born. For giving me the opportunity to say goodbye to a cherished friend (and with that, a little bit more of my dad), and hello to the “kids” of my childhood summers. The ones who taught me crazy cannonballs and introduced me to scary movies like Goonies.

Thank you for cousin giggles. For the range of experiences that come from entertaining a little one just learning to talk, to being driven around town by a big one about to leave home for his first year of college. For allowing my kids to relish in being adored, as well as adoring. Thank you for bodysurfing, cardsharking, beachcombing, storytelling grandparents. For aunts’ and uncles’ inside jokes and warm hugs.

Thank you for dripping ice cream cones. For handstands, cartwheels, baseball stadiums, and strawberry picking. For the chance to dig so many holes on the beaches of California that if we put them all together, we might have actually reached China. For the reminder that in a noisy world, there’s still a chance to listen to our hearts — and to each other (even if it’s at far too high a volume and with way too much foot stomping). Thank you for the peaceful days, and the chaotic ones. For the friends who helped us find joy in a totally-new-to-us place — or in the same old front yard.

Thank you for days measured in set of waves and empty sunscreen bottles. And for nights capped with leisurely strolls as the sun patiently smiled upon us.

You left our skin sunkissed, and our character strengthened. I’m so very grateful to you, summer.