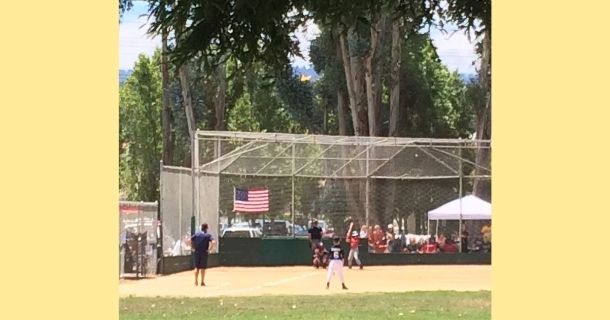 In 2015, travel baseball was an entirely new concept to me. Big was so excited to be joining a team a couple of his good buddies had played on the summer before, and we were happy to be along for the ride. Even if it did mean spending my birthday at the ballpark this once. So that June morning, I drove up to a park just south of SFO, navigated the massive revolving parking lot, hunted down the correct field, and started making my way over to his game. As I approached, far beyond the outfield, a yellow butterfly caught my eye and I stopped.

It circled me playfully, so I stood there as long as I could embracing the magic of the moment. Years before, Big and I had agreed that butterflies would be a way we’d remember my dad and feel his love. So to me, this was obviously my dad’s way of sending me heavenly birthday greetings. He’d been gone for about four years at that point, and though he couldn’t be there in person to watch his best little buddy take the field, it felt like he was there in spirit. I stood in the grass and soaked up the view: the baseball diamond filled with enthusiastic kids, the glorious American flag hanging above home plate, and the butterfly that seemed right in the moment with me. (I even snapped this picture to remember it…you can spot the butterfly in the opening between the trees.)

When I lost my dad, I grieved that he wouldn’t be able to see my kids grow up. As a child, and into adulthood, my dad was my biggest cheerleader. Whether it was shouting for me from the side of a pool as I raced my little heart out, sending me letters (and chocolate chip cookies) when he knew I was homesick, or standing by my side at Yahoo! as we yodeled our way into the Guinness Book of World Records—a marketing project I was outrageously proud of early on in my career—he was always showing up for me.

My goal is to be that same steady presence for my kids. To love what they love and be right there in those big moments with them. Not to lose myself in their worlds, but to embrace the life and happiness their joy brings to my world. I want them to know I’m proud of their tremendous commitment and team effort, win or lose. And with two boys now deep into the world of baseball, which I’ve come to learn is a game of failure and resilience, I have a whole lot of practice.

So this year, on my birthday, I was honestly thrilled to find myself heading back to the baseball field yet again. (There have now been a number of exciting birthday games through the years.) This year it meant I had the honor of cheering on Little’s All-Star team, which was playing its way through the winners’ bracket—surprising everyone with the team’s strength of character and perseverance. Knowing it was his final year of Little League, and that our friends who were 12-year olds the previous year had missed their magical season due to Covid, each game was even more sentimental.

As Pink and I rounded the corner from the parking lot, we stopped beyond the outfield to enjoy the pre-game introductions, National Anthem, and Little League Pledge. Of course I teared up, knowing this would be one of the last times we’d get to cheer for one of our kids alongside this community who had lifted us up, rallied us on, and given us something to look forward to every spring for the last ten years.

Then I spotted a butterfly dancing in front of us, and I turned to Pink, “Look. A butterfly. Did you know I’ve seen one at every single All-Star game your brothers have played in? All kinds of games, really.” She sort of smiled at me, a bit unimpressed. And I can’t blame her. She doesn’t know what it’s like to have my dad as your biggest fan. But I do, and it still gives me butterflies.