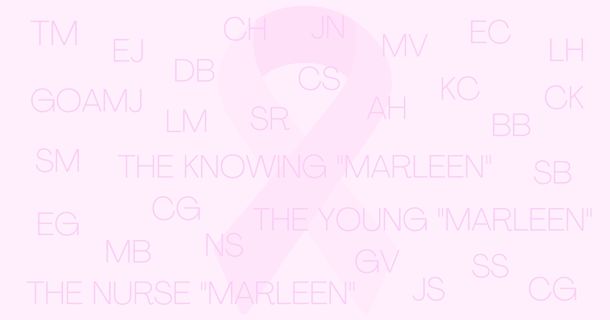 I tugged self-consciously at the top flap of my robe, half wondering if it had ever been soft, or the slightest bit comforting, for that matter. Countless industrial washes later the pastel flowers were sad, pilled, and faded. While my many appointments leading up to this one had begun in a personal waiting room, where I was accompanied by nothing but my anxiety, this time was different. Today I sat surrounded by matching robes, each wrapped around a host of unique worries, fates, and diagnoses.

The young woman across from me nervously fidgeted with the handle on the plastic bag where she had tucked away her street clothes and her dignity. She was nodding at the older woman talking to her with as much polite focus as one could muster in this situation. As the white-haired woman spoke, it became obvious that she was far more wise and further along in this journey than the younger woman or myself.

My impulse to duck away to the restroom was squashed when a third woman entered the room. The other two already knew her, it seemed, as the knowing one added her back into the conversation as if she had never left. “So who’s your surgeon?”

I spotted a Stanford nurse’s badge peeking out from the bottom of her robe, and was surprised to hear the nerves break through her thick accent when she answered. In this room she was one of us. One of the patients.

“Oh she’s wonderful!” the knowing one responded when she heard her surgeon’s name. “She has those tiny little hands and makes beautiful cuts and perfect little stitches.”

“That’s good to hear. She’s doing my surgery next week.” The three women all turned their heads at once, as if they hadn’t really noticed me there. I was as surprised by my words as they were.

“Well, she did mine — both sides actually — and barely even a scar!” The knowing one was quick to welcome me to the club, following up with gentle questions.

From somewhere deep inside, I could hear myself answering. Yes, a routine mammogram caught it. Yes, my diagnosis was the same as hers. Yes, we were both part of the same trial. Yes, I was here for more tests and a pre-op procedure to insert a wireless scout so the surgeon would know where to start digging.

She quickly explained to the wide-eyed young woman that our form of breast cancer wasn’t all that bad. It was caught early, we were lucky. Just a simple little surgery and radiation should do the trick. She was repeating all the things I’d been told over and over, so I nodded along. But somehow my brain hadn’t been able to hold “simple” or “little” in the same space as that other word. “Cancer.”

She returned to the subject of the miracle surgeon. “Yeah, she did a good job,” she continued to reassure us.

Then, as if to no one and everyone at the same time, she added, “But it was surprisingly hard. The emotional aspect of it, you know? Nobody really talks about that.”

For the first time, the room fell comfortably silent. There it was. Exactly what we were all feeling in our own way at that very moment. And every moment since the word “calcifications” or “mass” shook our worlds.

Obviously not one to wallow, she perked up and turned to me, “Ooh! Will you take a picture of the three of us?” She handed me her phone.

“You won’t believe this! We’re all named Marleen. I mean, look at us — all born at different times, in different countries with different cultures, and we all have the same uncommon name. What are the odds?”

The ladies scooted close together, suddenly lighter. Even a bit giddy to have something other than cancer in common. After their robes were adjusted and photo ready, I snapped a quick shot of the three Marleens. They quickly gathered around the screen to admire their moment. As the knowing one bemoaned her poor texting savvy while attempting to share the photo, a new voice broke through the chatter.

I waved goodbye to the Marleens and followed the nurse down the hall to the procedure room, buzzing with machines. This time, as I lowered the robe from my shoulder, my hand lingered on the fabric. I imagined all the people before me who had done the same. Oh the stories these flowers could tell! I said a little prayer for the three Marleens — and everyone else who had sat in that room — and suddenly I felt a little bit less alone.

I met the three Marleens* in May. Since then, I’ve been through the surgery. It wasn’t as little as doctors made it sound. I’ve been through the radiation. Quick, but certainly not painless. I’ve taken hormone treatments. The side effects are brutal. And rarely does a day go by that the knowing Marleen’s words don’t linger in my mind. Nobody talks about how hard the emotional part is. But maybe they should.

*Name changed to protect the privacy of the women.